Superheroes have been influencing our social and moral standards for decades – but it must easier for them to succeed because of their amazing super-powers. Note: I am a firm believer that Batman’s money is a super-power… and secretly hope that Bill Gates is running around in cape saving the world from polio and other infectious diseases. What is interesting is that Batman is just practice good management skills – and that anyone can do it! Here are the top 6 management lessons I’ve learned from the Dark Knight:

Batman surrounds himself with amazing and talented people. They focus on a common goal and trust each other to work together (most of the time). We are only as good as our weakest link – so it is crucial that we support and value everyone’s contribution while also encouraging each other to continue to improve.

Batman would be nothing without his arsenal of combat-fighting tools. Between Batmobiles, Batplanes, utility belts, Batarangs, and more – he makes sure he is ready for anything. He anticipates what resources he will need in future endeavors and makes sure that he is ready before he jumps in. Taking the extra preparation time is what has saved Batman from pending doom in more than one occasion.

Batman’s team also is looking for new and innovative ideas for tools and resources. Sometimes money isn’t the primary issue – and the team is able to leverage creative thinking to solve a challenge. Using innovative and effective resources is what will set your team for success in the future.

Batman always tries to act on what he perceives to be good in the face of evil. He has a high moral standard that dictates all of his action and sets the standard for his future goals. He recognizes that it is more important to maintain his own integrity and values than to sink to the levels of others – which also helps establish the foundation for his powerful brand. What are your values and how are they relevant to your career development? Have you (or would you) ever compromise your standards in order to accomplish something.

We cannot define success if we don’t have goals of what we’re trying to accomplish. Batman’s team knows exactly what they’re after and they develop specific plans on how to get it done.
Now… not everything goes according to plan, so it will most certainly change – but it is the clear goals that set the team up for success. Every action we’re taking at work should reinforce our team’s or organization’s goals.

We cannot deny that the Batman logo is one of the most recognized brand in the super-hero world. The Bat-symbol represents Batman’s values that give hope to the citizens of Gotham.
The bat-symbol is also the same  across all channels. His uniform, his vehicle, and probably even his business card is clean, consistent, and easy to understand. We know that when we see those wings that justice will be served.

Batman focuses on his customers – the citizens of Gotham. He makes sure that his actions will be in the best interest of the community as a whole and does everything he can to protect them (even if they’re working against themselves). How do you focus on your customers? How do you establish policies and practices to keep them “safe”? 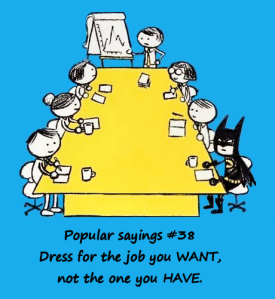 Yes, we all want to be more like Batman. Now instead of coming to work in a cape – hopefully these management tips from Batman will give you some good ideas.